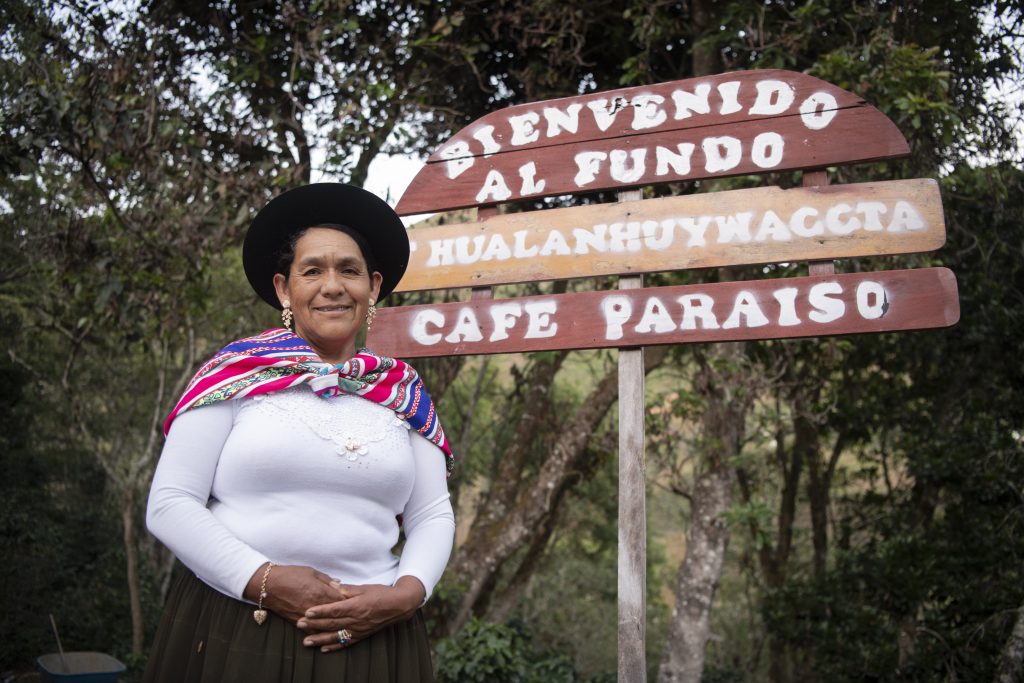 She fled the jungle, driven out by the scourge of terrorism. Fearful and preoccupied about the land she left behind, she returned to her dear Huancavelica. There, in the piercing cold of the Peruvian highlands, she started over from scratch. Coffee gave her a new chance, and today her crops are coveted.

It was in 1990 that terrorist activity caused her to flee Pichanaqui, the jungle area where she worked harvesting coffee on 37 acres of land. Relinda Chávez de Bendezú returned to Huancavelica, the region where she was born. Traveling alongside her husband Lorenzo, carrying their little boy on her back, she couldn’t help but wonder how they would make a living now. She had placed her hopes on coffee, but she was afraid the cold temperatures would make it hard to harvest good crops.

After settling in the district of Tintay Puncu, one of sixteen that form the province of Tayacaja, in the department of Huancavelica, Relinda was able to buy a plot of land three times smaller than the one she had left behind. As she recalls it, the soil soon began “to produce coffee, coffee, and more coffee.”

The name for the estate was a no-brainer: “Paraíso” (Spanish for “Paradise”). Life once again had meaning for this mother. Now, at the age of 54, she is one of the most renowned coffee producers in this part of the country, after her coffee, grown at an altitude of 2,150 meters (about 7,050 ft.) above sea level, was the only one from her department to make into the final round of the 2021 Taza de Excelencia competition.

Óscar Martínez Habich, the owner of Saba Café, the company that brought this bean to Lima, describes Relinda’s coffee as having notes of caramel, dark chocolate, bright acidity, and a full body, with a creamy mouthfeel and a citrusy aftertaste.

“Coffee means a lot to us. Thanks to coffee, I have been able to do what is most important to me: give my three children a good education,” says Relinda as she drinks a cup of her own Caturra Rojo varietal. In addition to her coffee crops, she grows avocados and other fruits.

“Huancavelica doesn’t get any recognition for its coffee, but we’re starting to prove everyone wrong,” she says.

Relinda’s family includes her husband, their three children, and three grandchildren. Her dream is to achieve a coffee of the highest possible quality so she can make a name for her town, which suffers from great poverty. “Coffee is hope,” she says, and the conviction in her voice is palpable.